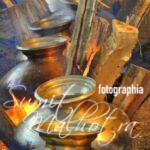 What is a Dham?

Dham is a Traditional Himachali Festive meal. It is a feast that is a good example of complete food as per Ayurveda having all six rasa, served in a proper sequence.

The entire Dham is Satvik and is made by Boti Chefs of the region. Satvik means onion, ginger or garlic are not used to prepare a Dham. Preparations for this elaborate mid-day meal begins a night before the event.

A temporary kitchen called Rasialu is usually built outside the main house with bamboo sticks as main pillars and steel sheets as roof to cook the Dham.

Food is generally cooked in thick copper and brass vessels with a broad base and a narrow opening. These utensils are normally called “Batohi“, “Baltohi” or “Charoti” in local languages.

Why is a Dham Satvik?

It is believed that initially dham was served in the temples as Prasad, and hence, the entire meal is Satvik. Another unique aspect of traditional dham is that usually no vegetables are used in any of the dishes. It is purely made from various types of lentils and dairy products.

What are the types of Dham in Himachali cuisine?

There are 12 kinds of Dham in Himachali cuisine. These pertain to the regions where they are served. These dham are briefly explained below.

To Learn More About Himachali Dham, Click Below for the Books