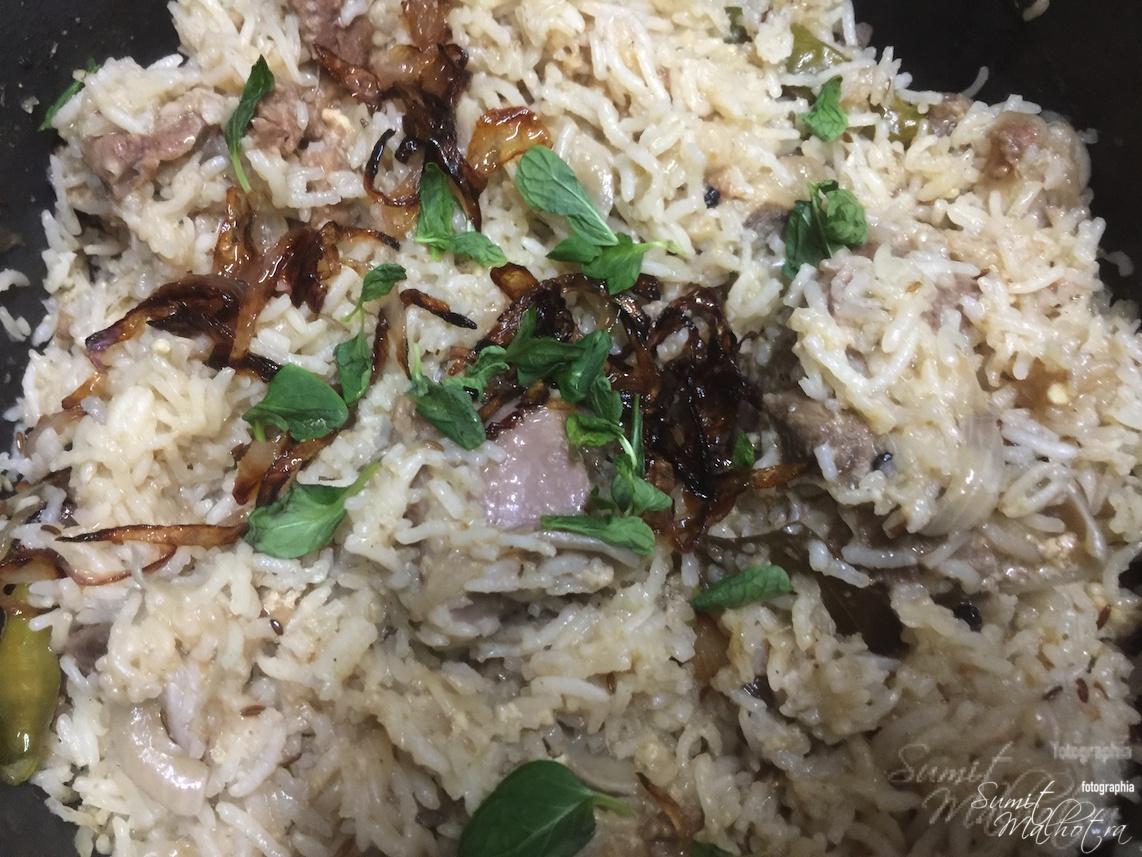 It is cooked with long-grained basmati rice cooked in a flavoured mutton stock made with a carefully selected blend of aromatic whole spices.

What is the difference between pulao & biryani?

The difference between pulao and biryani is that while pulao is made by cooking the meat in with warm aromatic spices in water till the meat is tender. Then the rice is added to the mutton broth along with mutton which is then sealed and cooked over low heat till it’s done.

Whereas for a biryani, the rice is boiled or parboiled separately in spiced water and then layered with meat curry or marinade, depending on the type of biryani being cooked, which is then sealed and cooked over low heat till it’s done.

In effect, Yakhni is the stock of the meat with few aromatic spices. The meat i.e. the Chicken or the Mutton or the Lamb, is boiled with the ingredients in a bouquet garni or potli for flavour infusion.[/vc_column_text][/vc_column_inner][/vc_row_inner][vc_column_text]Kashmiri cuisine is known for its various meat preparations, cooked meticulously using a range of spices and flavouring agents. You find the same reflections in gosht yakhni pulao recipe too.

In a nutshell, gosht yakhni pulao is simply mutton or lamb cooked with masalas & stirred in with seasoned rice. The rice is then topped off with mutton stock and cooked.

How do you make mutton stock?

The broth/ stock is made using mutton and aromatics or whole garam masala which is tied in a muslin cloth. This muslin cloth fixture is called a bouquet garni.

All whole spice ingredients are put inside a cheesecloth or a muslin cloth and tied in a knot on the top. This bouquet garni is simply popped into the cooking pot.

Aromatic spices are the essence of this pulao or pilaf. Primarily, these include fennel seeds, dry ginger powder, cinnamon, cloves, black and green cardamom.

Yoghurt is another ingredient that is the key to combine all these flavours together and provides this pulao with its unique flavour. 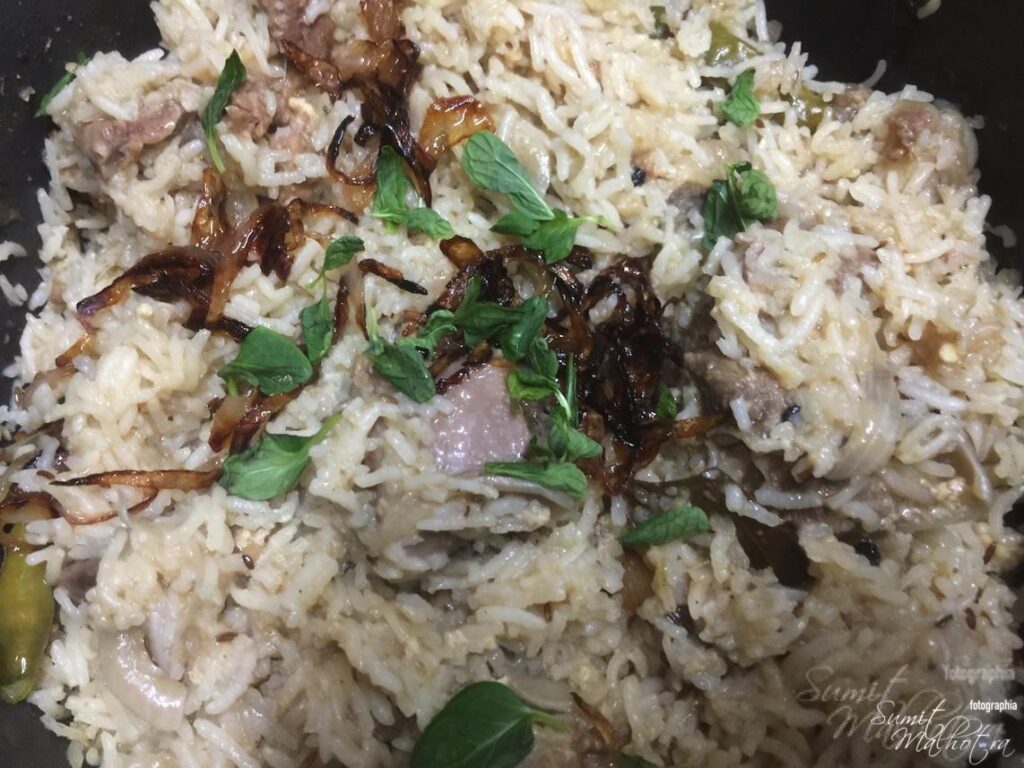 A Bit of History

Yakhni came to be known in Kashmir during Emperor Akbar’s rule. Yoghurt-based meat curries were an integral part of the Persian cuisine. Emperor Akbar introduced this style of cooking to his new state when he annexed it in 1586. Akbar, in fact, influenced various regional cuisines if northern India, which have now evolved to become exclusives cuisines in their own right.

Originally Gosht Yakhni meant a light curry made with lamb meat. Over the years it has gone on to include chicken and even vegetarian versions like Paneer Yakhni.

How is Gosht Yakhni made?

The meat is first cooked along with a handful of spices to acquire an aromatic broth. The meat pieces are again added back to with yoghurt and left to simmer. It is then slow-cooked for some more time to finally acquire the smooth texture with delicate meat.

The word ‘yakhni‘ first appeared in the book ‘Ain-i-Akbari’ which technically is a Persian journal during the time of Akbar the Great. This three-volume journal throws ample light on the Mughlai cuisine. Yakhni, the writer Abul Fazal wrote, was prepared by water, onion and lamb.

Yakhni dishes are also seen in Greek and Turkish cuisines, but what sets the Kashmiri Yakhni apart is the absence of tomatoes.[/vc_column_text][vc_single_image image=”6032″ img_size=”full”][vc_column_text]

Are Gosht Yakhni Pulao and Gosht Biryani the same?

No, actually they are not as I stated before too. The distinction is made by the way they are cooked.

A Pulao is a dish where we cook the meat/vegetables along with the rice without any layering. On the other hand, in a biryani, there are alternate layers of rice and meat. And we semi cook the rice (boil the rice) before the layer.

Biryanis are often Dum and has the flavoured and cooked rice. While in yakhni pulao recipe, the rice is uncooked and just soaked in water. Here, we cook rice together with spices, meat and curd.

I know, many people get confused with the term biryani and pulao, as both of them are rice oriented delicacy, seasoned with fried onions, coriander and mint leaves.[/vc_column_text][/vc_column][/vc_row][vc_row css=”.vc_custom_1598009062007{padding-left: 10px !important;}”][vc_column][vc_column_text]

How to serve Gosht Yakhni Pulao?

This tempting combination of mutton yakhni pulao is best served with mixed vegetable raita and people of all age groups will love it. Nothing more is needed.[/vc_column_text][/vc_column][/vc_row][vc_row css=”.vc_custom_1598009072208{padding-left: 10px !important;}”][vc_column][vc_column_text] 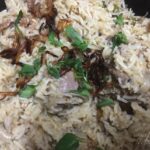 Gosht Yakhni Pulao or Mutton Yakhni Pulao is a traditional pulao recipe preparation of long grain basmati rice cooked in aromatic spiced mutton stock with delicious melt in your mouth meat. It is a must-have so go for it.

Yakhni is an integral part of the Kashmiri cuisine in India. However, Pakistanis and Afghanis also stake a claim on it. This is possible enough since Pakistan was a part of India before partition. And, Afghanistan was the gateway for the Mughal invaders to reach India and an outpost for the Mughal empire.