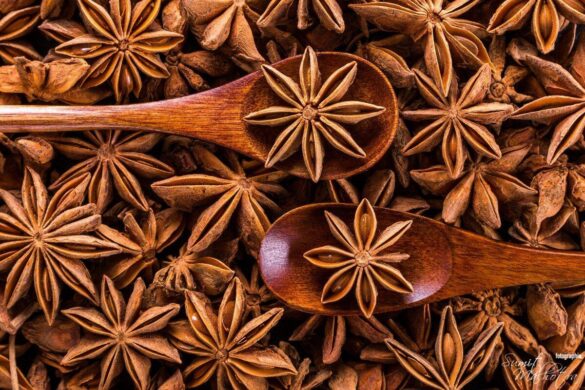 Star anise is one of the signature flavours of Chinese savory cooking. The five-spice powder mix common in China contains star anise.

It is used to flavour vegetables, meat, and to marinate meat. It is also used as a condiment for flavouring curries, confectionaries, spirits, and for pickling.

It is widely used as culinary and medicinal fruit and is most popular in indigenous system of medicine. The fruit is an important source of essential and volatile oil.

Traditionally, the fruit has been used as carminative, digestive, dyspepsia, antispasmodic, and stimulant, antirheumatic and diuretic.

What are the other names of Star Anise?

Chakra Phool names in other languages are given below.

What exactly is Star Anise?

Get to know about Anasphal or Chakra Phool 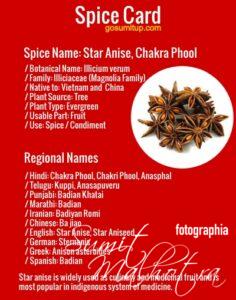 Botanically, Star anise is the dried, star shaped fruit of Illicium verum. It belongs to the Illiciaceae (Magnolia Family).

It is an evergreen tree native to northeast Vietnam and southwest China and attains a height of 8-15 meters and a diameter of 25 cm.

Fruits of Illicium verum are star shaped, reddish brown consisting of 6-8 carpels arranged in a whorl. Each carpel is 10 mm long, boat shaped, hard and wrinkled containing a seed.

The character­istically shaped fruits (pods)of Illicium verum are always used in dried state. They are harvested before ripeness and dried to a rusty brown color.

Besides the regular eight-pointed shape, one rarely finds single specimen with a larger number of carpels.

What are the medicinal properties of Star Anise?

What is the nutritional value of Star Anise?

For thousands of years, Asia has been using chakra phool to heal and improve wide range of conditions.

What is the chemical composition of Star Anise?

The other com­ponents, methylchavicol, phell­andrene, linalool, safrole and terpineol, have only small effect on the aroma.

Traces of 1,4 cineol can be used to distinguish chakra phool from aniseed, which (like most other spices) is free of this compound.

What is the history of Star Anise?

The history of the Star anise dates back to 100 B.C. and is harvested from an evergreen tree.

It has long been intertwined in Chinese history dating back 3,000 years. It is present in its folklore, culinary, and medicinal uses.

It was general wisdom that chakri phool wards off evil and good luck would fall upon you if you found the spice with more than eight pods.

During the 16th century it began its movement into western civilization through the spice trades when an English navigator, Thomas Cavendish introduced the Chakra phool to Europe in 1578.

Star anise was believed in Europe to originate from the Philippines instead of China. This was because Thomas Cavendish brought the first fruits to Europe via the Philippines.

Clusius brought the fruits in London in 1601 and later they were traded to Europe along the tea route from China via Russia as ‘Siberian cardamoms’.

During 17th century the fruit became a popular substitute for aniseeds in commercial drinks.

During this period it was used in syrups, jams and puddings, because of its sweet flavor.

Many Mediterranean cultures utilized the fruit for its energy boosting and digestive properties which lead to developing digestives. Ouzo was produced in Greece, Raki in Turkey, Sambuca in Italy, and Pastis in France.

What are the uses of Star Anise?

How is Star Anise or Chakra Phool used?

What is the the taste of Chakri Phool or Chakra Phool?

Star anise has a mild and fragrant licorice flavour. It is warming and earthy, so it plays well with spices like cinnamon, nutmeg, & allspice. Its subtle sweetness works well in desserts 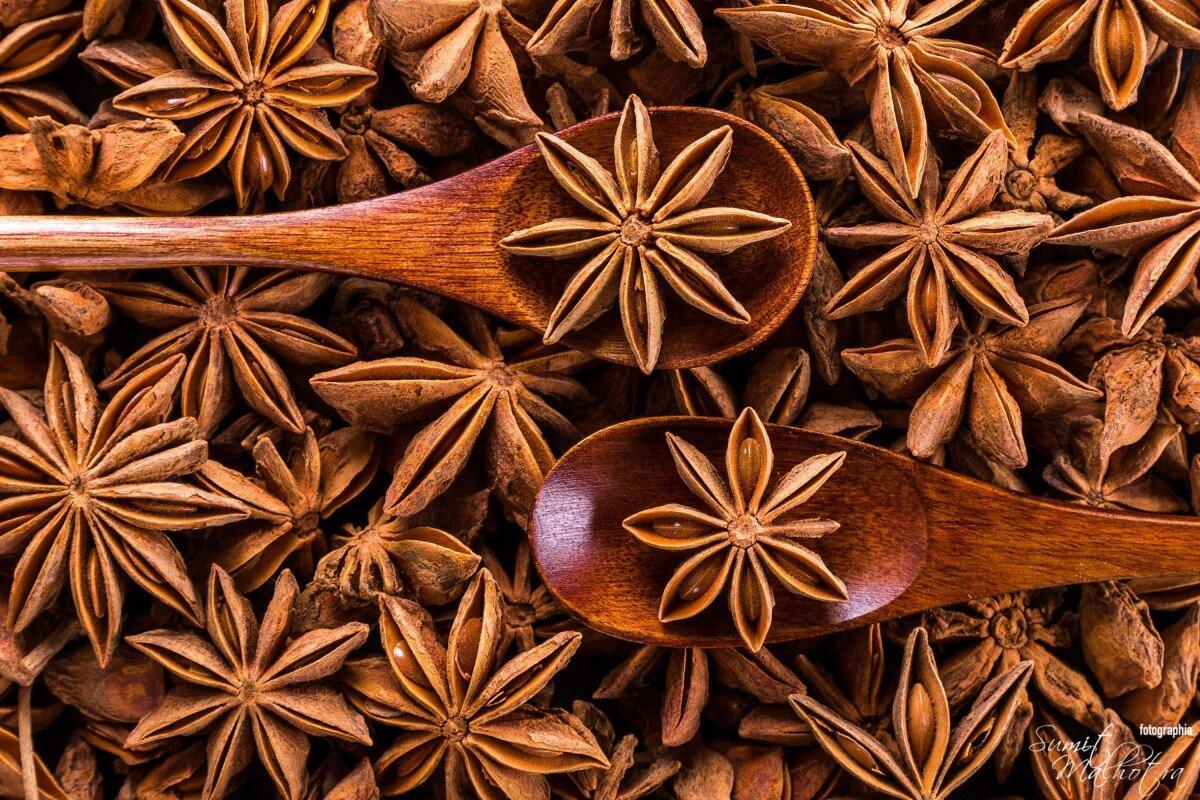 What can I use Star Anise for?

Learn how to use Chakra Phool or Chakri Phool in your food & beverages.

How long does Star Anise last?

Learn about how long does Star Anise last in storage.

Whole star anise remains fresh and full of flavour for about a year. The ground spice begins to lose flavour and potency after about six months.

How do I store Star Anise?

Learn about how to store Star Anise.

Store your Chakra Phool spice in a dry & airtight glass container in a place where it’s away from heat, moisture, and direct sunlight.

Is there a substitute for Star Anise?

Learn how to use a substitute for Chakra Phool if unavailable

Substitutes for 1 Star Anise are as given below with relative quantities:

Where do I buy Star Anise from?

Where to Locate Star Anise in the Grocery Store?

Chakra Phool are available in seeds, whole or powdered form. You can buy Chakra Phool (Star Anise) at most Indian groceries, supermarkets in the spice aisles. Or, online at Amazon.

What are the health benefits of Star Anise?

Learn about health benefits of Star Anise or Illicium verum

The following are health benefits of Star Anise, Chakra Phool or Chakri Phool. 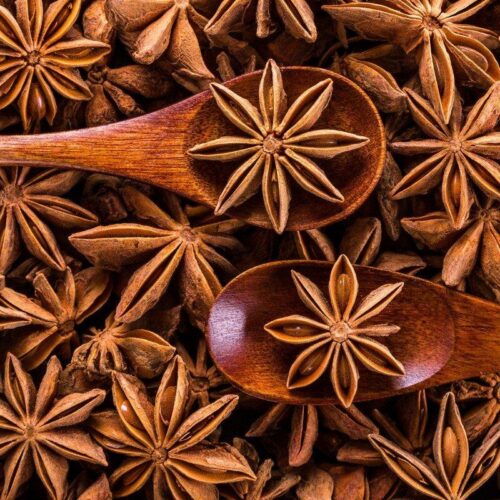 All About Star Anise (Illicium verum) | Benefits of Star Anise

Chakra phool is one of the signature flavours of Chinese savory cooking. The five-spice powder mix common in China contains Chakri phool.

It is used to flavour vegetables, meat, and to marinate meat. It is also used as a condiment for flavouring curries, confectionaries, spirits, and for pickling.

It is widely used as culinary and medicinal fruit and is most popular in indigenous system of medicine. The fruit is an important source of essential and volatile oil.

Traditionally, the fruit has been used as carminative, digestive, dyspepsia, antispasmodic, and stimulant, antirheumatic and diuretic.

All About Barberry | Know Your Spice Zereshk (Berberis vulgaris)