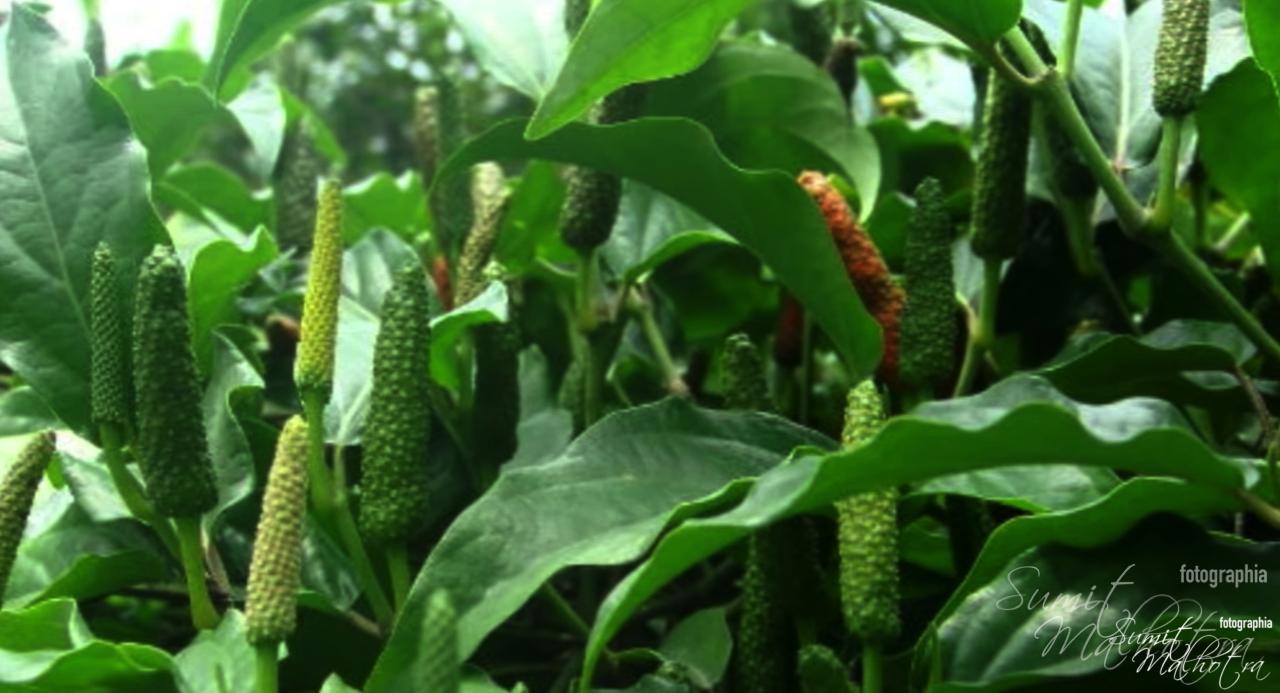 Long pepper was freely used alongside (and often confused with) common black pepper in kitchens from ancient Rome to Renaissance Europe.

But the arrival of chillies from the New World and the rising popularity of black pepper shoved long pepper out of the culinary spotlight.

Indian Long Pepper is known for its curious looking spikes & is known to help in stimulating the appetite.

What are the other names of Indian Long Pepper?

Pipli names in other languages are given below.

What exactly is Long Pepper?

Get to know about Thippili or Pipli 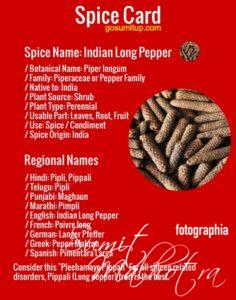 The plant stems are flexuous, pubescent and terete. The leaves are simple. The petiole is grooved, of variable length and can reach 10 cm long.

The blade is ovate, 6 –12 cm × 3 –12 cm, papery, the base cordate and asymmetrical, the apex acuminate and with two or three pairs of secondary nerves arising from the base.

The inflorescence is a cylindrical and slightly curved spike which is 1.5 –5 cm long and opposite the leaves. The fruits are drupaceous, globose and 0.2 cm in diameter

There are actually two commercially grown species of long pepper: Piper longum, and the cheaper and wider-spread Piper retrofractum, from Indonesia (the island of Java, specifically).

Their flavours are similar enough to be interchangeable, but they’re worth mentioning for inspiration about cuisines the spice takes well to.

What are the medicinal properties of long pepper?

What is the nutritional value of long pepper?

Find out about the nutritional value of Pipli or Thippili

Recent work on its fruit has shown the presence of the alkaloids, piperine (4 to 5%) and piplartine (25%), and two new alkaloids, one of which is designated as alkaloid A.

This is closely related to pellitorine producing marked salivation, numbness and a tingling sensation of mucous membranes of the mouth.

A sample of dried fruit of long pepper on steam distillation gave 0.7% of an essential oil with spicy odor resembling that of pepper and ginger oils.

What is the chemical composition of long pepper?

Know and understand about chemical composition of Thippili or Pipli

Studies were carried out on the chemical composition of long pepper and the results showed that long pepper contained about 1% volatile oil, 1.25% piperine and 40% starch.

Analysis of the essential oil showed the presence of 48 components, out of which 44 were identified for the first time.

What is the history of long pepper?

The oldest known reference to pippali comes from ancient Indian textbooks of Ayurveda, where its medicinal and dietary uses are described in detail.

Pippali pepper was first mentioned in Charaka Samhita (IV–II B.C.) – the ancient Indian guide to a healthy and balanced way of living.

It reached Greece in the sixth or fifth century BCE, though Hippocrates discussed it as a medicament rather than a spice.

Among the Greeks and Romans and prior to the European rediscovery of the American Continents, long pepper was an important and well-known spice.

The ancient history of black pepper is often interlinked with (and confused with) that of pipli, though Theophrastus distinguished the two in the first work of botany.

The Romans knew of both and often referred to either as just piper; Pliny erroneously believed dried black pepper and Indian long pepper came from the same plant.

It is also said that Attila the Hun demanded part of the ransom for his sacking of Rome to be paid in long peppers.

Round, or black pepper, began to compete with long pepper in Europe from the twelfth century and had displaced it by the fourteenth.

The quest for cheaper and more dependable sources of black pepper fueled the Age of Discoveries.

After the discovery of the American continents & of chili pepper, called by the Spanish pimiento, employing their word for long pepper, did the popularity of long pepper fade away.

The word pepper itself is derived from the word for long pepper, pippali.

The plant itself, is a native of India. The word pepper in bell pepper, referring to completely different plants (in the Capsicum family), is of the same etymology.

What are the uses of Long Pepper?

How is Indian long pepper or Pipli or Thippili used?

What is the the taste of Thippili or Pippali?

It possesses black pepper’s heat and musk, but in a less harsh, more nuanced way, tempered by sweet notes of nutmeg, cinnamon, and cardamom.

Its finish lingers on the tongue with a tobacco-like coolness; where black pepper stings, long pepper balms. 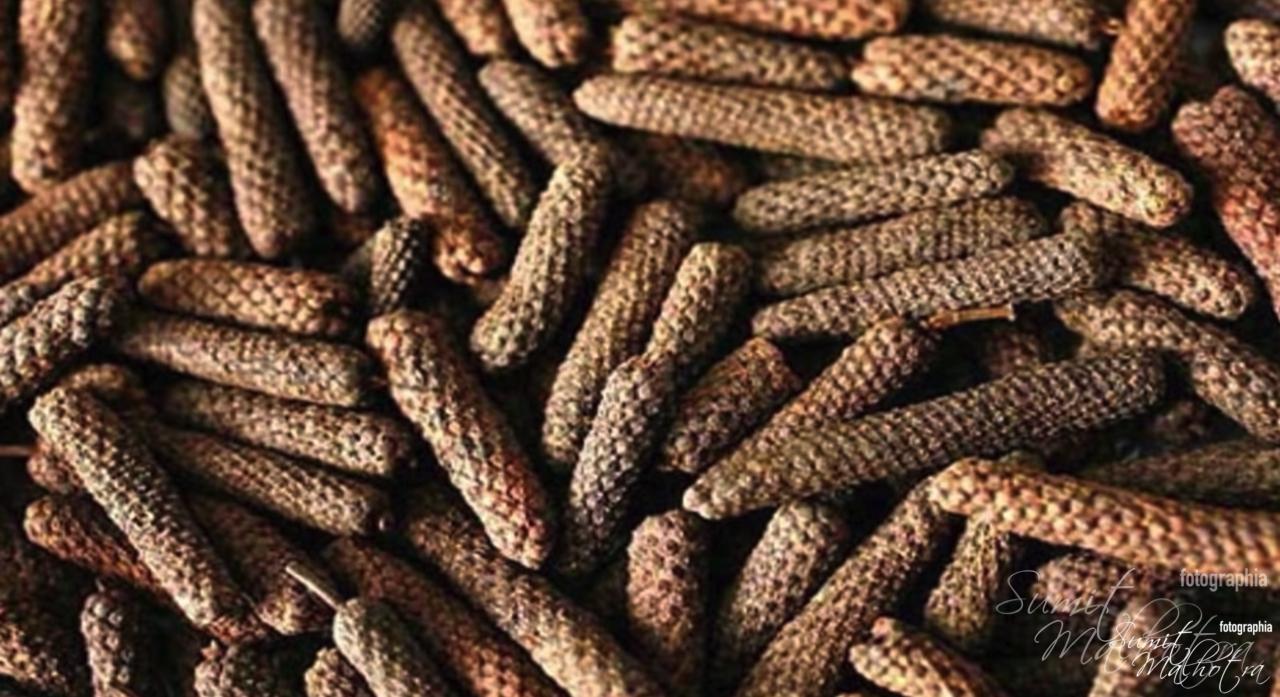 What can I use Long Pepper for?

Learn how to use Pipli in your food & beverages.

How long does Long Pepper last?

Learn about how long does Long Pepper last in storage.

Stored whole, pippali may last for 3 – 4 years. Stored ground it will last for upto two years but it may lose some of its potency over time.

How do I store Long Pepper?

Learn about how to store long pepper.

Store pipli in a dry & airtight glass container in a place where it’s away from heat, moisture, and direct sunlight.

Is there a substitute for Long Pepper?

Learn how to use a substitute for pippali if unavailable

You can use white pepper with a bit of ground nutmeg, mace or cardamom.

The pine and citrus notes that come from tellicherry pepper make it a great substitute for long pepper in terms of flavor.

The grains of paradise spice is also known as alligator pepper has several similarities to Indian long pepper.

Where do I buy Long Pepper from?

Where to Locate Long Pepper in the Grocery Store?

Pippali are available in whole, crushed or powdered form. You can buy pippali (Long Pepper) or dried lemon (lemon omani) at most Indian groceries or online at Amazon

What are the health benefits of Long Pepper?

Pippali has been shown to help fight diseases such as inflammation, depression and diabetes, among others, so it’s a great reason to add Pipli to your repertoire right now. 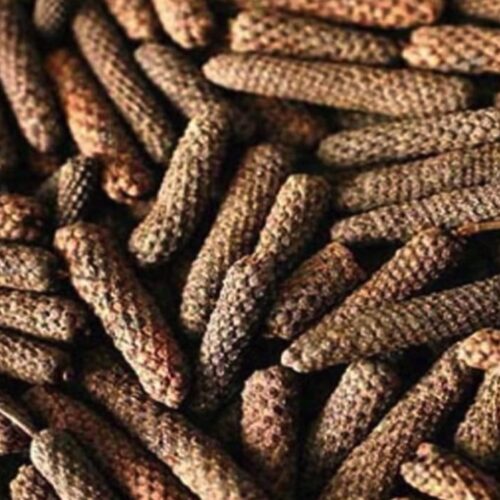 Pipli was freely used alongside (and often confused with) common black pepper in kitchens from ancient Rome to Renaissance Europe.

But the arrival of chillies from the New World and the rising popularity of black pepper shoved pippali out of the culinary spotlight.

Indian Long Pepper is known for its curious looking spikes & is known to help in stimulating the appetite.

It possesses black pepper’s heat and musk, but in a less harsh, more nuanced way, tempered by sweet notes of nutmeg, cinnamon, and cardamom.

Its finish lingers on the tongue with a tobacco-like coolness; where black pepper stings, long pepper balms.

All About Loomi | Know Your Spice Dried Lime (Citrus aurantifolia)

Hi … Can I replace black pepper with long pepper?

Hi Saumya. You sure can. In two of my latest recipes – shami kebab and mutton burger patties I replaced black pepper with Pipli (Indian Long Pepper). The peppery taste in fact turned out to be better with pipli.