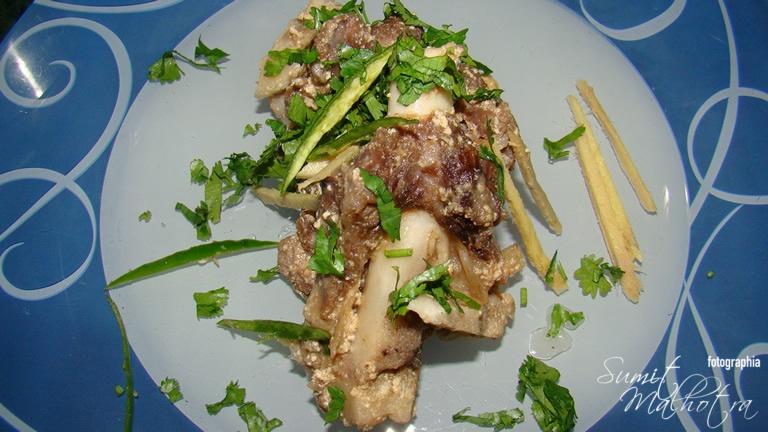 Namkeen Gosht is a very common and famous dish of Northern and Western areas of Pakistan. It is very simple to make as well. Keeping it simple, heat oil and add the meat with its marinade. Then, you let the meat cook in its own juices and salt and pepper seasoning for about 30-40 minutes.

What is Namkeen Gosht?

Namkeen Gosht Recipe is a delicacy from the cuisine of Quetta, Baluchistan. It is also made in other areas of NWFP including Peshawar & Dera Ismail Khan. Punjabi Namkeen Gosht is made either during Eid-ul-Azha (Badi Eid) or for special family functions. It is different from the famous Peshawari Gosht or Peshawari Kadai Gosht.

My attempts to find the original recipe of this very elusive dish were quite painful and confusing.

Namkeen Ghost is famous, simple and delicious recipe belongs to the cuisine of KPK. As mentioned previously, it is made commonly at Quetta, Baluchistan and Peshawar. But in Punjab people opt for it either during Eid-ul-Azha or for special family functions.

Some recipes advocated the use of papaya as a tenderiser while others suggested the use of vinegar. Some preparations indicated use of black pepper and others said: “stay away”. There were a few that recommended the use of tomatoes, turmeric & red chillies. This was enough for me to enter a state of total analysis paralysis for the Punjabi Namkeen Gosht recipe.

While some recipes advocated the use of just garlic, others suggested use of both ginger and garlic.

I understood that traditionally this decadent dish was made with either beef or goat’s meat. Due to the unavailability of both, I planned to work with mutton or goat meat where fat content is relatively lower. A big downside. Having said this, in case the meat doesn’t have much fat, do consider using a bit of “Ghee“.

The process, however, is extremely simple. You essentially let pieces of meat with fat simmer gently within its marinade. Reduce till there is a cup of yakhni (stock or simple broth) left. By then the meat is delightfully tender and juicy. Do try this Punjabi Namkeen Gosht recipe. It’s a must-have. 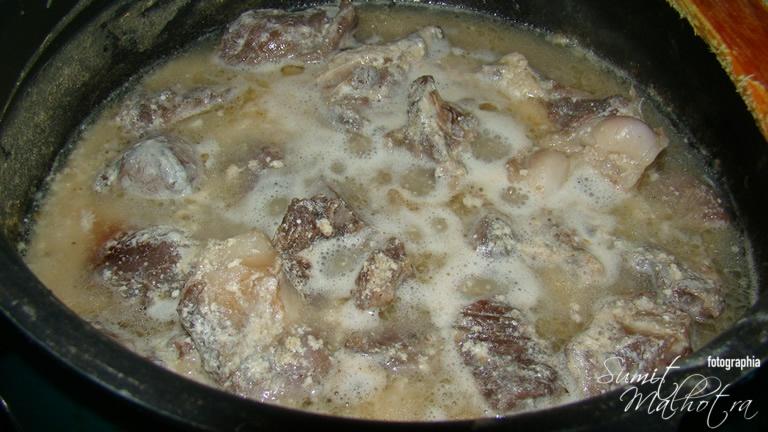 Keeping it simple, heat oil and add meat to sautéed ginger, garlic and green chillies. Let the meat cook in its own juices and salt and pepper seasoning for about 30-40 minutes. Depending on the altitude, cooking pot, size and cut of meat cooking type may vary. Garnish is simple too just like the dish itself. Serve hot with naan.

I finally decided to use a simpler set of easily available ingredients and make Namkeen Gosht a bit “Punjabi” that I am. This mutton dish is akin to another delicious mutton that my mother makes. Mom’s recipe is called Khatta Meat. But my recipe of Namkeen Gosht is contrary to her recipe which is with pressure cooking.

I decided to give it a bit of punch with green chillies and not using black pepper at all. The results were spectacular.

Hope you all like my Punjabi Namkeen Gosht Recipe that follows below.

Care to be taken for making tender and juicy namkeen gosht

Step By Step How to Make Punjabi Namkeen Gosht?

DO TRY THESE MUTTON RECIPES TOO!

Finally, to Sum It Up

Quetta Namkeen Gosht is a must have recipe. 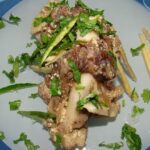 Namkeen Gosht is a mutton dish popular in Khyber Pakhtunkhwa and its adjoining regions; Afghanistan, the tribal belt and Central Asia, where dishes similar to the local Namkeen Gosht are still enjoyed today.

@Chaiti If wishes were horses, air would be better. 😜 and the air is not to be blamed, someone did it to air.